David’s magic shows have live animals. This Rolesville Magician makes white doves appear from thin air. A tin pan is shown completely empty then a bunny rabbit appears. No Rolesville Clown can make a real live monkey appear out of fire , but Magic by David’s finale is just that . A real live monkey does appear out of fire. You can reach Magic by David at 919-266-1682 or his web site www.davidmagic.net Why hire a Rolesville Clown, when you can book Magic by David? This Rolesville Magician has reasonable rates. Your child will have a birthday memory that will last a lifetime. David’s show last about an hour long. He performs many illusions. The show is fast paced and has a lot of energy. The children’s attention will be kept with a Rolesville  Magician not a  Rolesville Clown. 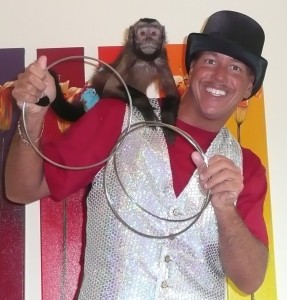